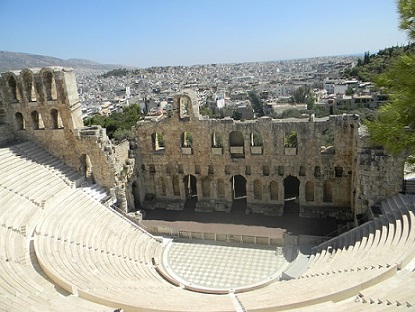 Website of the XXIII World Congress of Philosophy — http://www.wcp2013.gr/

On the eve of 23rd WCP in Athens

How are you all? In the eve of 23rd WCP, I am very delighted to celebrate the Spring issue of our journal with all members and would give my kind greetings for expecting to meet many members at the coming 23rd World Congress of Philosophy (WCP) in Athens, Greece, from 4 August to 10 August.

Indeed, at the point of our gathering in Athens, it is useful to show, to all over the world, the current (Spring 2013) issue of our BCA e-journal “Biocosmology – Neo-Aristotelism”, Vol.3, No.2. This issue is devoted exactly to the coming roundtable of the 23rd WCP that is planned as the 5th International Seminar on Biocosmology. We expect that our gathering in Athens will bring about a good chance to share the Biocosmological paradigm with many philosophers (scholars) from all over the world.

Thanks to these authors and their wonderful contributions, it becomes gradually clear that the Biocosmological thinking cannot only communicate with other thinking traditions, like Buddhism, Chinese Classics, Indian Ancient Philosophy; or many other fields of modern science, as semiotics, biology, mathematics, philosophy, literature, sociology, linguistics, etc.; but also involves in its research territory all the human intellectual traditions. At the same time it means that Biocosmology (Neo-Aristotelism) is open to all the sciences and all the other cultural contexts or intellectual traditions.

In fact, it is very expected that the roundtable on Biocosmology-Neo-Aristotelism in the 23rd WCP will be a good chance to show the Biocosmological approaches to many important academic items and to share Biocosmological ideas with all participants of WCP.

My special gratitude goes to Dr. Konstantin S. Khroutski, the editor of this journal. Without his commitment, this journal has not been issued in time.

The Biocosmological Association has the next international seminar plans in December at Kumamoto University, Japan; and in the next June – at Monmouth University, New Jersey, U.S.A. Likewise, following the cooperative way of development with other research groups – we have some other plans for the growth of Biocosmological approach, for example, with Prof. Fritz Wallner’s group of Intercultural Studies under a viewpoint of Constructive Realism (planned for the Autumn of 2014 in Seoul); and with Chinese philosophers group (next year, in the Beijing Normal University, China). These plans will soon be noticed. I hope many members will be able to join and make the seminars a field of abundant fruits of Biocosmological systematic investigation and thinking exchanges.

Once again, I am very pleased with the current issue of “Biocosmology – Neo-Aristotelism” and would share my joy with all members.